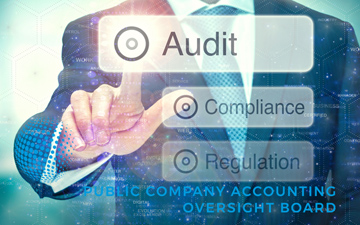 Of the 11 audits reviewed by the PCAOB across the four Canadian firms, the highest number of audits (4) belonged to EY Canada. Forty EY Canada partners in total were engaged by issuer audit work, reflecting the size and complexity of Big Four client engagements, compared to, for example, the single engagement partner of a smaller firm, McGovern Hurley.

Under the Sarbanes-Oxley Act, registered firms outside the US are subject to PCAOB inspections in the same manner as US firms. Since the inception of the PCAOB's international inspection program in 2004, the PCAOB has conducted inspections of one or more registered firms located in 54 non-U.S. jurisdictions, including Canada.

Of the 11 audits reviewed in total pertaining to the four firms, no firm had any audits with a single deficiency.

Other instances of non-compliance with PCAOB standards or rules

Some commonalities emerge in the inspection reports of the four firms in regards to non-compliance. Three of the four firms (DMCL, EY Canada, and McGovern Hurley) were non-compliant with Rule 3211, Auditor Reporting on Certain Audit Participants, though the reasons for non-compliance varied. The rule dates back to 2016 and was the subject of “lengthy and protracted debate,” mostly over the naming of the lead audit partner, a disclosure not required in Canada.

BDO Canada was in non-compliance with AS 1301, Communications with Audit Committees, and AS 3101, The Auditor’s Report on an Audit of Financial Statements When the Auditor Expresses an Unqualified Opinion. In our reporting on three PCAOB inspection reports in July 2022, we found that all three Canadian firms also did not comply with AS 1301, Communications with Audit Committees. These commonalities across multiple inspection reports suggest an opportunity for further training on compliance.

As a rule, the PCAOB does not make public quality control deficiencies if it has reasonable assurance that the issues can be addressed. “If a firm does not address to the Board’s satisfaction any criticism of, or potential defect in, the firm’s system of quality control within 12 months after the issuance of our report, we will make public any such deficiency.”

The PCAOB provided the three Canadian firms with an opportunity to review and comment on draft of their respective reports. Unlike the inspection reports published in July 2022, all four firms responded in writing to the PCAOB, expressing in different ways their commitment to audit quality and appreciation of the work of the US audit watchdog.