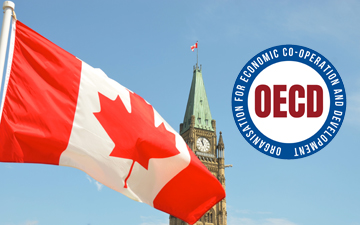 Allan Lanthier: We should not hamstring our job creators at the precise time when our giant competitor to the south has rejected the tax

Part I of this article discusses recent developments in the US and the European Union, and sets out the fundamental reasons why Canada should reject the OECD proposal.[1] Part II is a technical analysis explaining why the OECD backstop — the “undertaxed profits rule” — will be unworkable should a country decide to withdraw, and why the backstop is therefore of little relevance to Canada’s decision.

In October 2021, over 130 countries agreed to a general framework for the OECD tax — though none actually agreed to implement the tax, only to consider at a later time whether or not to proceed. That time has come, and Canada should withdraw. What is really driving the proposal is not corporate tax avoidance: it is the fact that cash-starved governments around the world need new tax revenue, and big business is always an easy political target.

There are in fact two proposals (or there were, until the US abandoned its own initiative). The US has its own global tax — “GILTI” (for “global intangible low-taxed income”) with rules that are very different from those of the OECD. Ms. Yellen wanted to get the GILTI framework as close as possible to the OECD rules and become “OECD-compliant”: she is not going to get her way.

The OECD proposal applies to multinational groups with annual consolidated gross revenue of at least € 750 million (about C $1 billion) and to all entities whose results are included in the financial statements for the group. The “effective tax rate” must be computed for all group entities in every country and, if the rate is less than 15 percent, “top-up tax” must be paid to make up the shortfall: at least that’s the theory. Which group entity is supposed to pay the top-up tax is discussed in Part II of this article.

Where does the OECD proposal stand? Before the US withdrawal discussed below, many countries including Canada said they intended to proceed. However, with the US out of the deal, countries may reconsider.

The European Union is a particular question mark. Under EU rules, changes to tax laws require unanimous agreement by all 27 member countries and, at the latest meeting of the EU finance committee in mid-June, Hungary, alone and defiant, voted against implementing the OECD tax at this time. Its government cited concerns over an additional tax cost to Hungarian businesses when they are already under economic pressure as a result of Russia’s invasion of Ukraine.

The new Czech president of the EU finance committee will try to convince Hungary to reverse its position at the next committee meeting in early October: whether he will succeed is far from clear. In short, the US is out of the deal and unified global support for the OECD tax is evaporating.

The US GILTI proposal

GILTI was added to US tax law as part of a massive bill signed by Donald Trump in December 2017. Among many other measures, the bill slashed the US federal corporate tax rate from 35 to 21 percent, but also added GILTI as a minimum tax on earnings of foreign subsidiaries of US multinationals. However, the GILTI rate is only 10.5 percent, and the rules allow foreign low-tax income from tax havens to be averaged with high-tax income from other countries. As a result, GILTI results in only modest amounts of annual tax revenue, and is not OECD-compliant.

The Biden administration wanted to enact its own ambitious package — the “Build Back Better Act” (BBB) and, as part of BBB, strengthen GILTI to make it OECD-compliant.  In November 2021, the House of Representatives passed BBB by a narrow vote of 220 to 213, with no Republican support: the bill included two major corporate tax increases:

BBB never came to a vote in the Senate. With a 50-50 split in the Senate, the Biden administration needed each and every Democratic vote, and Mr. Manchin would not support the package. And so BBB languished for months, until last week.

The estimated additional tax revenue from the two separate taxes under BBB was substantial: more than US $300 billion over ten years from the CMT, and close to an additional US $300 billion from GILTI and other international tax changes. These two taxes have been the source of some confusion over the last few days, even for some within the international tax community. So to be clear, CMT only applies to the largest US multinationals, such as Amazon and Nike, and is not applied on a country-by-country basis. The US CMT is not OECD-compliant: it is not even close.

The twists and turns of Mr. Manchin:

As BBB languished, negotiations continued between Mr. Manchin and Senate Majority Leader Chuck Schumer. All to no avail it seemed. On July 15, speaking with a radio host, Mr. Manchin stated he could not support even a scaled-down version of BBB at this time: also, that he doesn’t support the GILTI changes because other counties have yet to enact the OECD tax, and he doesn’t want to put US corporations at a competitive disadvantage and damage the US economy. Mr. Manchin said he would be willing to reconsider these issues in September, after he receives further reports on inflation rates and interest rate hikes.

And then came the shocker. On July 27, less than two weeks later and with no new inflation reports in hand, Senators Manchin and Schumer announced they had reached a deal on a scaled down BBB – the “Inflation Reduction Act of 2022” (IRA). IRA includes the CMT — the 15 percent tax on corporate giants with annual consolidated profit of more than US $1 billion — but does not include any GILTI measures.

Might the US reconsider GILTI changes later this year? That seems unlikely. There will be fiercely partisan fights in both houses of Congress over the next few days, and IRA may or may not pass. Either way, it is difficult to see the Democrats introducing further legislation in September, so close to the midterm elections — elections that could give control of Congress to the Republicans. If anything, Mr. Manchin’s reversal on the other issues has made it clear that GILTI changes will not proceed. As a practical matter, the US has rejected the global deal that it championed. Canada should reject the OECD tax as well.

Canada should reject the OECD proposal

In addition to the fact that the US — the world’s largest economy and Canada’s major competitor for business investment — has rejected the OECD tax, there are three other fundamental reasons why Canada should withdraw.

First, the OECD tax has very little to do with corporate tax avoidance: that has been addressed by earlier OECD initiatives. In 2015, the OECD issued a 15-point plan to address tax avoidance, and Canada is proceeding with many of those recommendations. For example, Finance Canada issued draft legislation in February to limit interest expense deductions to a fixed ratio of tax EBITDA (earnings before interest, tax, depreciation and amortization) — 26 pages of legislation and 68 pages of explanatory notes. That was followed by further draft legislation in April to address so-called “hybrid mismatch arrangements” — 15 pages of some of the most complex legislative proposals ever seen, plus 71 pages of explanatory notes.

Second, there is a much easier way to address the opportunities for corporate tax avoidance that remain, using targeted changes to Canada’s tax code to address the loopholes. For example, there is one provision in our code that allows multinational corporations to shift income from high-tax countries to tax havens, using intragroup royalty and interest payments.[2] The issue was highlighted by the auditor general 30 years ago, but Finance Canada never acted. This loophole could be repealed with the stroke of a pen — a repeal that would raise more cash for our government’s coffers than the entire 70-page package of OECD model rules.

Finally, the tax will hit large business and the Canadian economy at the worst possible time. Large businesses — those with more than 500 employees — account for more than 40 percent of private sector jobs in Canada — jobs that tend to pay higher wages than small business, and contribute more to innovation and productivity. We should not hamstring our job creators at the precise time when our giant competitor to the south has rejected the tax.

Some countries will implement the OECD tax. The United Kingdom for example has issued a partial set of draft rules (116 pages long) — rules that do not yet include the backstop measures discussed in Part II of this article. Certain other countries will proceed as well. Let them. As for Canada, it is time for the federal government to put domestic job creation and economic growth ahead of political gesturing. Canada should withdraw from the initiative.

Allan Lanthier is a retired partner of an international accounting firm, and has been an advisor to both the Department of Finance and the Canada Revenue Agency. Top image: Modified image of Jason Hafso, Unsplash. Author photo courtesy: Allan Lanthier.

Substantive CCPCs: Is the tax deferral game over?