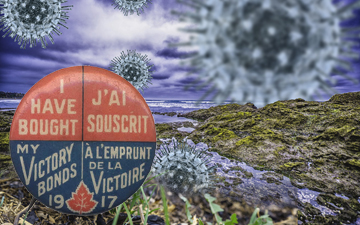 There is no magic money tree in economics, says Anton Muscatelli

GLASGOW – The macroeconomic shock to the world economy from the COVID-19 pandemic is arguably unprecedented in modern times. The financial response by governments of the major economies has been substantial.

The Center for Strategic and International Studies estimates that the G20 had deployed US$7 trillion (£6.2 trillion) in direct spending, tax relief and lending by the end of May. That is more than 10% of their combined GDP for 2019, averaging over 12% among the advanced economies. This exceeds the fiscal support measures taken by governments during the great financial crisis of 2007-09, as can be seen in the map below.

Yet economists agree that 2020’s interventions were both necessary and timely. More may also be needed. In many of the industrialised economies, governments have focused on employment support and subsidised loans to businesses of all sizes. Some countries like Germany are now announcing major investments in green infrastructure and consumer incentives like cutting VAT and subsidies for electric and hybrid vehicles.

In the UK, the Office for Budget Responsibility (OBR) currently estimates that the total impact on government borrowing will be £132.5 billion in 2020-21. This will widen the deficit to over 15% of GDP, compared to less than 2% in 2018-19.

Even this depends on whether the lockdowns end and economic activity can resume. If not, deficits could exceed those seen in wartime, when they peaked in the regions of 25%-30% of GDP.

Many wonder how the additional debt will be paid for. For the UK, even on the OBR’s most optimistic scenario that economic activity will rapidly recover in the three months following a three-month lockdown, the debt-to-GDP ratio peaks at 110% and returns to 95% in 2021. If the recovery is much slower, most governments will face very high debt-to-GDP ratios indeed.

On March 19, the Bank of England said it would increase its holdings of UK government bonds (gilts) and certain corporate bonds by £200 billion to £645 billion. The ECB announced a €750 billion (£668 billion) programme around the same time, then expanded it on June 4 to €1.35 trillion. The Fed’s new QE commitment is open-ended, with over US$1.5 trillion of assets purchased since the crisis began.

It’s important to note that QE programmes are not directly financing government spending. The money created by the central banks is used to buy government debt from the likes of investment funds which have bought it from the government. The central banks are propping up demand for this debt to ensure that the cost of government borrowing stays low. This potentially avoids disorderly situations where investors become more wary of buying the debt because they think that the country in question has become a bigger credit risk.

Second, the purchase of government debt from banks gives them more money to potentially lend. This is reversed when the QE programme ends. Third, the asset purchases create stability. During the great financial crisis, one of the greatest impacts of QE was to signal to financial markets that the central banks were serious about sustaining economic recovery with a loose monetary policy that kept interest rates low.

The key question about QE is whether giving governments breathing space to borrow, while loosening monetary policy, will have unforeseen consequences. After the 2007-09 crisis, there were concerns that QE would drive up asset prices and cause people to take excessive risks. There is evidence that this did happen.

This time around, we have already seen stock markets surging. The S&P 500 is up 43% since mid-March. Linked to this are concerns that unwinding a very large QE programme at the end of the crisis could destabilise markets — note that the QE injections following the previous crisis have never been completely reversed.

Another worry is that QE may be insufficient to stimulate demand in the economy after a crisis as deep as that caused by COVID-19. Some economists, such as Jordi Gali and Refet Gürkaynak and Deborah Lucas, are arguing for a so-called “helicopter drop” of money to support fiscal policy.

What they mean is central banks giving new money direct to their governments that would never need to be repaid – known as direct monetary financing. This would remove the need for those governments to issue extra debt to the markets.

It’s probably too early to resort to such financing, without seeing how long the crisis lasts and how effective QE is in supporting governments in debt financing. Meantime, more could be done to spread the debt burden across several generations.

For example, governments could issue debt with very long maturity dates like 50 or 100 years, or even debt that never matures — so-called perpetual debt or consols — as is common in war-time finance. The UK chancellor, Rishi Sunak, is currently being urged by many in his party to think along these lines.

It is also important to realise that direct monetary financing is not a free lunch.

Regrettably, there is no magic money tree in economics. Ultimately current government spending is a claim on real resources that has to be financed either directly through future taxes and growth or lower future spending, or through future inflation (which is a tax on money and creditors).

The crisis will, however, mark a change in the relationship between governments and central banks. Blurring the boundaries between the two, even though QE, requires them to co-ordinate their actions much more closely. In the post-COVID era, the notion that central banks are independent of governments is bound to be somewhat diminished.

Anton Muscatelli is the principal and vice chancellor of the University of Glasgow. Top collage includes images from Canadian War Museum and image by fernando zhiminaicela from Pixabay.

The four phases of a potential post-pandemic Canadian economy