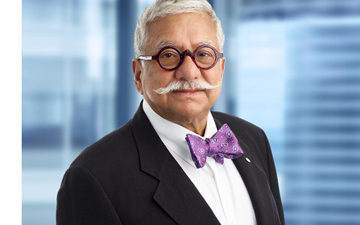 Vern Krishna, FCPA, FCGA on the history of taxation around the world, from ancient Mesopotamia to modern-day Canada

THERE is a popular misconception about taxes that they are a modern creation. In fact, taxes in one form or another have existed since the dawn of civilization. We see one of the earliest forms 4500 years ago in Mesopotamia, when a king imposed a toll tax on the bridge that his citizens used daily to cross the river to farm their lands on the other side. All taxes are behavioural. To avoid the toll, the locals began to swim across the river. This was the first manifestation of tax planning.

The king was not amused and responded with a rule that made swimming across the river an offence subject to severe sanctions, such as decapitation. This was the first manifestation of antiavoidance tax rules. Today, we have the modern version in the general anti-avoidance rule (GAAR) in section 245 of the Canadian Income Tax Act, which is intended to curtail aggressive tax planning.

Every civilization in history has levied taxes in one form or another. Although each tax was unique, they had a common result: they induced behavioural responses and creative tax avoidance.

The Pharaohs of Egypt imposed taxes on cooking oil and appointed tax collectors ("Scribes") to oversee the collection of the taxes. To make sure every citizen paid their share of taxes, the scribes visited households to audit the amounts of cooking oil that households were consuming, always anxious to ensure that they were not using substitutes to avoid paying the cooking oil tax.

The Athenians of Greece charged a tax ("Eisphora") on its people during times of war. Every Athenian was required to pay this tax, which was used for spears, arrows, crossbows, shields, and armour that the soldiers required for war. The tax was considered an "emergency tax" and was cancelled once the war was over. The Eisphora has an unusual feature in that the taxes were refunded if they returned victorious from the war with riches acquired from their defeated foes. They also charged a tax ("Metoikion") on all residents who did not have both an Athenian mother and father. Here we see the genesis of non-resident taxation.

Ancient Romans appointed people ("Publicani"), who went around the markets with wicker baskets, to collect 'gifts' that the people were forced to offer to the Emperor Caesar. These baskets were called Fiscus Cesares, a Latin term meaning "the basket" or "moneybag", an early form of political fund raising. In Roman law, it meant Caesar's treasures. As with all tax collectors, the Publicani were not very friendly in their collection techniques and were greatly despised by the peasants.

During feudal times, vassals (tenants) paid a type of tax called "Aids to his Lord" when the lord's eldest son was knighted, or his eldest daughter was getting married. During the same era, English men who did not want to join the army or go to the war paid a tax ("Scutage") to purchase their exemption.

Some taxes were punitive. Legend has it is that in the 11th century, an Anglo-Saxon woman, Lady Godiva, agreed to ride naked on a horse through the streets of Coventry to get her husband, Leofric, Earl of Mercia, to reduce the high taxes he was charging the poor peasants. The Godiva myth was later popularized in songs and in verse by Alfred, Lord Tennyson, who wrote a famous poem called "Godiva" in 1840.

During the 13th century, England imposed a tax on hats, which was intended to protect the beaver fur industry that was developing in the North American plantations. The tax was collected by means of a stamped ticket fixed to the lining of the hat. Shops were required to specify the price of the hat and taxes paid on the purchaser's receipt, an early form of tax reporting.

Prior to 1798, the English revenue system relied primarily on customs and excise duties. The medieval system of taxes on property was by then a very small proportion of general revenues. After the declaration of war with France, England needed revenues to fight Napoleon and introduced the first modern day income tax in 1800. The Duke of Wellington defeated Napoleon at the Battle of Waterloo, in Belgium, on June 18, 1815.

The following year, opponents of the tax forced its abolition and demanded the destruction of all documents that referred to the law. However, one copy was saved in the basement of the English tax court and became the model of the English tax system.

The Boston Tea Party was essentially a revolution against Great Britain's Stamp Tax on everything from tea to legal documents. The revolution gave birth to the phrase "No taxation without representation".

Canada financed the First World War with more than $2 billion in debt. Canadians expected the War to be short, victorious, and relatively inexpensive. They were wrong. Sir Robert Borden introduced the Income War Tax Act in 1917 (all 11 pages) as a temporary measure to finance the War. As Sir Thomas White, Minister of Finance said: "I have placed no time limit upon this measure . . .a year or two after the war is over, the measure should be definitely reviewed." However, unlike England, which did, as it promised, at least temporarily, abolish its income tax, Canada did not. Today's Income Tax Act is a direct descendant of the Income War Tax Act and contains many of the same provisions.

Canada also incorporated "No taxation without representation" into its Westminster parliamentary system.1

From War to Social Justice

Most tax systems were introduced to finance revolutions and wars. However, income tax law has evolved beyond wars and is now also concerned with social and economic objectives. Income redistribution is now one of the dominant themes of tax legislation.

Tax law is behavioural. Tax rules invoke responses from taxpayers who respond to incentives and sanctions. For example, we have special tax rules to encourage Canadian culture and films [section 125.5], discourage investments in foreign magazines [subsection 19(1)], and promote gender equality. For example, the February 2018 Federal Budget of 362 pages mentioned women 358 times. The Act has grown from 11 pages to 3,000.

Since income tax is the appropriation of private property for public purposes, it inevitably creates friction between taxpayers, who want to minimize their taxes, and legislators, who seek new ways to curb "tax leakage". The tension results in prolonged and costly litigation, which can tax extend to ten years. Tax litigation is beyond the financial resources of most middle-income taxpayers, who bear the greatest burden of raising tax revenues. There is no alternative dispute resolution process in tax law.

Income tax law has a reputation of being a difficult and dry subject. To be sure, tax law is difficult and is replete with difficult and obtuse language. Even Albert Einstein, conceded: "The hardest thing in the world to understand is the Income Tax." Taxes are, however, the price we pay for civilization.

1. The Westminster system is a parliamentary system of government modelled after that which developed in the United Kingdom. The term comes from the Palace of Westminster, the seat of the British Parliament. The system is a series of procedures for operating a legislature.