The Pandora Papers: How punishing tax cheats can serve as a deterrent 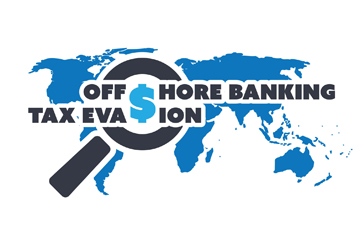 HALIFAX – Law-abiding taxpayers look on with disappointment and disdain as details about the illicit financial arrangements of the ultra-wealthy surface — again. The latest leak of nearly 12 million offshore financial records — the so-called Pandora Papers — provides clues as to how the rich avoid paying their fair share of taxes.

Sports stars Jacques Villeneuve, a former Formula One racer, and figure skating legend Elvis Stojko are among the Canadians who have been named in the Pandora Papers.

This is not the first time the public has learned about how the wealthy evade taxes and shield their riches. The Panama Papers, Paradise Papers and Luxembourg Leaks uncovered aggressive tax planning and tax evasion undertaken by the global elite.

When the rich, famous and infamous don’t pay their fair share of taxes, the public looks to authorities to enforce tax laws and punish the offenders. Punishment creates a sense of retributive justice and serves as a reminder that tax compliance laws should be obeyed for the collective good of society. However, authorities often fail to deliver, perpetuating the cycle of injustice.

What we don’t know for sure is whether punishing the offenders involved in global tax scandals benefits the reported income compliance of observers and deters tax cheats. My preliminary research suggests that the answer is “yes,” but only if observers perceive that the tax offender is fully blameworthy or responsible.

If the punishment of blameworthy offenders can improve compliance, it would seem logical for tax authorities to actively prosecute all suspected offenders. But this is hardly the case.

With limited resources and the risk of losing costly legal battles, not everyone who evades taxes and shields wealth gets punished. Even worse, if prosecutors’ cases don’t stand up in court, it can encourage aggressive tax planning or tax evasion because a precedent is set that undermines tax authorities.

Why does compliance increase when tax cheats are punished? My research findings reveal that compliance improves when wrongdoers appear more deserving of prosecution and are ultimately punished. Observers experience satisfaction when authorities uphold justice, especially for the wealthy.

When justice is applied equally, authorities reinforce their requirement to be obeyed, which signals both their competence and that tax evaders will be found and held accountable.

Pointing the finger at advisers

Being perceived as guilty increases perceptions of an offender deserving a punishment. As such, a strategic course of action for those exposed in global tax scandals is to deny responsibility. Ultra-wealthy individuals named in the Pandora Papers and other tax scandals often blame lawyers or advisers.

Stojko has denied responsibility and said he trusted his lawyer to manage his financial details.

Similarly, the wealthy Cooper family of British Columbia — named in the Panama Papers — denied responsibility. Marshall Cooper, who grew up in South Africa, stated that he was unaware of Canadian tax laws and simply hired the best advisers to manage the family’s finances.

With blame being tossed back and forth, perhaps authorities should pursue the lawyers and advisers of the wealthy rather than simply punishing tax evaders.

The media may shame the wealthy, but lawyers, accountants and other advisers act as enablers who facilitate aggressive tax planning, and likely in some cases tax evasion. If enablers share responsibility, they too should be punished. It’s possible that punishing enablers could also compel taxpayers to comply with tax laws.

Enforcing punishments on proven tax cheats could provide added benefits beyond improving compliance to tax laws. Once offenders pay up, billions lost to offshore scandals could be recouped and the tax burden more fairly shared among taxpayers.

Still, in the aftermath of the Pandora Papers, taxpayers are likely wondering what the authorities will do this time and whether tax offenders will get the punishments they deserve. Global tax transparency efforts are ratcheting up, possibly offering a glimmer of hope that justice will prevail. But even with this silver lining, some remain pessimistic.

With evidence that punishment can re-establish a sense of justice, authorities should use their resources to ensure culpable offenders are held accountable. Upholding justice, especially for the wealthy and privileged, serves the collective good of society.

Professor Ronan Palan on the repercussions of the Pandora Papers