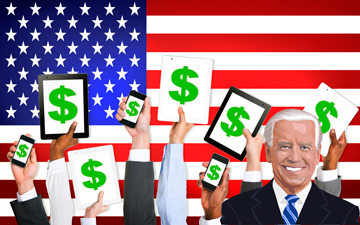 OTTAWA, Dec. 22, 2020 – On the campaign trail, U.S. president-elect Joe Biden proposed an increase in U.S. corporate tax rates from 21 per cent to 28 per cent, and an increase in personal income tax rates for individuals making more than $400,000 annually.

Experts say that two run-off elections for Senate seats in Georgia in early January 2021 will go a long way toward determining whether those proposals come to fruition. If Biden’s Democrats win both seats they will effectively control the 100 seat Chamber, with Vice-President Kamala Harris likely casting the tie-breaking 51st vote. (The Democrats already control the House of Representatives.)

Policy development, howver, goes through three political phases, explains Fred O’Riordan, the Ottawa-based national leader of tax policy for Big Four accounting firm EY Canada. First is the formulation of election platform proposals. “These are what I would call aspirational statements of policy, designed in part to secure widespread public approval. They’re not all necessarily realistic,” he says.

“The second phase, once elected — which is now — is he’ll probably examine these proposed policies and possibly weed out or water down some because he wants to maximize his chances for getting Congressional approval. The third phase is what he can actually do — what’s achievable, where he will have sufficient support in Congress to get legislative approval and implementation,” O’Riordan adds.

Even if the Democrats win both of the Senate seats up for grabs, the Chamber will be split 50/50, which will be problematic for Biden’s agenda because of the checks and balances in the U.S. system. The new president will be “vulnerable and exposed to a lot of horse trading from various Senators, and to some extent, even Congressional members because their majority in the House will have been reduced,” predicts O’Riordan.

O’Riordan believes that Biden’s proposed increases in U.S. corporate and personal tax rates are material and will have an impact if adopted.

On the upside, having U.S. corporate tax rates increase could restore some of the tax competitive advantage that Canada used to hold vis-à-vis the U.S. prior to passage and implementation of the Trump Administration’s Tax Cuts and Jobs Act of 2017, he adds.

Jennifer Acuna, a principal in the federal legislative and regulatory services group of KMPG LLP’s national tax practice in Washington, D.C., says the ability of President-elect Biden to pass the significant corporate and individual tax increases he has proposed will likely depend on control of the Senate.

The proposed increase in taxes would likely be used for other policy goals and proposals that cost a significant amount of money. If the Democrats take control of the Senate after the Georgia run-off elections, “the odds of these proposals coming into effect increase significantly, even with that 50/50 razor-thin majority,” she says.

For example, “if there is appetite to move green initiatives then tax would be an area that would be looked at to raise the amount of money needed to pay for those initiatives,” says Acuna.

Stephen Williamson, a professor of economics at the University of Western Ontario in London, notes that the previous corporate tax cuts under the Trump Administration had little impact on Canada. He does not expect proposed corporate tax increases under President Biden will have much of an impact either, except to the extent that they might influence the decision of U.S. businesses about where to locate, relative to Canada.

He also expects little impact from the proposed personal tax increase to the highest earners, unless this affects the U.S. economic performance, and thus international trade with Canada.

Jean-François Perrault, senior vice-president and chief economist for the Bank of Nova Scotia in Toronto, believes that Biden’s chances of having his proposed corporate and personal tax increases pass into law are “extremely unrealistic.” Even if the Democrats end up narrowly controlling the Senate, “it’s not a slam-dunk that they would then support President-elect Biden in a tax reform proposal.”

In fact, “if the Republicans retain control of the Senate I wouldn’t be surprised to see a package go forward where Biden agrees to lower corporate and personal tax rates in exchange for the Republicans supporting more fiscal spending,” he adds.

From Canada’s perspective, even if the proposed tax increases were to pass and Canada became more tax competitive relative to the U.S., “it’s probably a bit of a pipe dream to think that’s going to fundamentally change an investor’s decision as to whether or not they should set up shop in Canada versus the U.S.,” says Perrault.

James Marple, senior economist and managing director with TD Bank in Toronto, also agrees on a tough road ahead for Biden tax increases. Marple does not expect to see the proposed corporate and personal tax rate increases take effect if the Republican Party retains control of the Senate. But even if political conditions are such that the proposed increases pass, Marple does not expect they will have much of a long-term impact on either the U.S. or Canada.

“It does, on the margin, make Canada a little bit more competitive if you’re looking at where investment may go on an international scale. But I don’t think that all of a sudden Canada would become that much more attractive. There are just so many other factors that are important to investment decisions,” he says, citing the regulatory environment and the structure of the economy in a particular jurisdiction as examples.

There is no strong data evidence that the Trump Administration’s corporate tax cuts in 2017, which lowered the U.S. rate from 35 per cent to 21 per cent, brought clear long-term benefits to the stock market or investors, or GDP growth, says Marple. So, even if the Biden election campaign’s proposed corporate tax hikes from 21 per cent to 28 per cent come to fruition, “I don’t think that is going to be a game changer for U.S. economic growth or investment.”