U.S.-Canada trade under Trudeau minority governments: Then and now 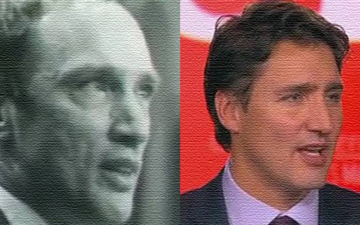 Ignoring trade policywould be a mistake for the Trudeau minority government

TORONTO – Election season is over for Canadians — except for all of those continuing to follow the campaign trail to the White House.

The political situation Justin Trudeau finds himself in is strikingly similar to his father’s in the early 1970s. Canada is again facing alienation in the West, nationalism in Québec and impeachment to the south. The Richard Nixon tapes contained some choice words about Pierre Trudeau, and President Donald Trump has publicly chastised his son.

In Justin Trudeau’s minority Parliament, alliances will need to be made and compromises brokered to pass legislation.

However, the focus 50 years ago seemed to be on domestic policies, not foreign. But ignoring foreign policy is the worst-case scenario in today’s minority situation.

Tensions have flared between the U.S. and Canada in recent years, particularly after Trump’s tariffs on Canadian steel and aluminum in 2018 resulted in billions of dollars of lost export revenue. The tariffs were lifted in May, supposedly clearing the way for ratification of the new Canada-U.S.-Mexico trade agreement by all three countries. Only Mexico has to date done so.

Discerning the intentions of our neighbours has always been a feature of the Canadian-American relationship, none more so than in trade. Anxieties over the relationship and the threat of American domination have been central to Canadian economic development for the last century.

The history is more than just a story of goods and services moving across a 8,891-kilometre-long border. It’s a story of how both countries have worked to know one another and live peacefully beside each other.

Canada sent its first three consuls general to New York, Chicago and San Francisco by 1948 to promote cross-border business and distinguish itself from Great Britain. Today, there are 16.

In 1954, the U.S. Chamber of Commerce launched a public service campaign with a brochure entitled: Are Canadians Really?

It talked about the myth that the Great Lakes never froze solid because of the warmth shared between Canadians and Americans. But as the editors asked, were the twitching lips of the neighbours smiles or gas pains?

Trying to address both elements of the relationship, Canadian governments have worked to strengthen trade relations and safeguard against America’s influence over their domestic markets via economic nationalism, the Canadianized term for protectionism.

At first, Canada worried about foreign investments in particular industries, like the railroads, and required that the majority of directors of any company that received government money could not come from outside the country.

Another approach was to ensure at least some firms in a given sector remained under Canadian control. This was achieved with amendments to the Bank Act that required 75 per cent Canadian ownership in financial services.

Tariff reductions were the more outward-looking and reciprocal approach of the mid-1960s. The antecedent of NAFTA, and now the USMCA, originated in this period. The signing of the Auto Pact lowered trade barriers and integrated supply chains, a model that hadn’t been tried before in peacetime.

All of these policy experiments were anchored by the fundamental assumption that the U.S. would continue to move toward freer trade.

Nixon’s ‘jump off the diving board’

In the 1970s, Richard Nixon veered off course by ending the link between the American dollar and gold — the foundation of the international economic system since the end of the Second World War. It was, as the chairman of Nixon’s Council of Economic Advisers said, “a jump off the diving board without any clear idea of what lay below.”

It was a move away from free trade, because it made the world economy more dependent on the vagaries of the U.S. dollar. Nixon’s New Economic Policy also included a 10 per cent tax on imports.

Trump has been replicating these “America First” moves and the stakes are just as high. According to Canada’s commerce department, the U.S. accounted for 70 per cent of the Canadian export market in the 1970s; today, the World Trade Organization puts the percentage in the mid-70s.

“The fact is that in recent months the world has entered a new phase in international trade.” This was the view from the father of socialized medicine, Tommy Douglas, in the House of Commons. He added:

“We are now playing a different ball game. For the moment at least, the United States has retreated into a citadel of protectionism.”

Both Trump and Nixon saw import taxes as a way to address a trade deficit. To eliminate it, the United States would have to sell more to Canada than it buys. But Canada is the smaller country, and the revenue generated by the imbalance is necessary to service its debt to the U.S.

Without a trade deficit, Canada would be reliant on U.S. direct investment to grow its economy. These numbers reached staggering proportions in the late 1960s — as high as 99 per cent foreign ownership in Canada’s petroleum and coal industries.

His minority Parliament needed support from the left-leaning NDP. The New Democrats then pushed the government into stronger nationalist policies than the Liberals ever intended.

But most provinces took a regional approach to trade. Nova Scotia was never going to limit foreign companies exploiting its natural resources just because Ottawa said so; it wanted jobs, and the province’s proximity to the eastern seaboard made it easy. North-south trade has always been the easier option.

The agency created by Pierre Trudeau has since gone from limiting foreign money to welcoming it. And now, Canada is pursuing trade diversification beyond the U.S. via its international trade ministry.

America’s central role in the global economy allows it to instil its anxieties internationally. All countries are dealing with how resurgent U.S. protectionism plays out in terms of immediate trade prospects and the long-range forecast for a freer trading world.

Protectionism had unintended consequences for Canadian policies in the 1970s and could again today.

There’s a different Trudeau in office, and another minority Parliament dealing with a fractious population. It’s easy to ignore foreign and trade policy when a motion of non-confidence could lead your government to fall any day. But focusing on domestic policy alone is not the answer. It’s a lesson both Canada and the United States should remember.

Jennifer Levin Bonder is a Junior Fellow at The Bill Graham Centre for Contemporary International History, University of Toronto.