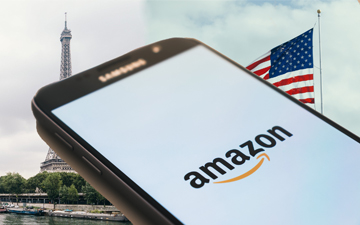 Charlottesville – France and the U.S. have managed to avoid turning their recent trade skirmish into a war — for now.

The dispute involves France’s decision last summer to unilaterally reach outside the United States-French tax treaty framework to tax U.S. tech companies like Google, Amazon, Facebook and Twitter. Calling the French tax an illegal trade practice, the U.S. vowed to retaliate with 100% tariffs on a broad range of French products.

After talks in January, French President Emmanuel Macron and President Donald Trump appeared to reach a truce. France agreed to delay the digital tax until the end of the year, and the U.S. won’t impose more tariffs.

The truce allows time for tax officials from nearly 140 countries including France and the U.S. to hammer out a deal to modernize the international tax system. On Jan. 31, they agreed to push ahead with negotiations to rewrite global cross-border tax rules by the end of the year.

So, for the moment, your brie and bordeaux are safe.

As a tax professor, I applaud the willingness of France and the U.S. to negotiate. The problems with the international tax system can’t be resolved by these two countries alone.

That’s because the current rules based on century-old tax treaties are ill-suited to the demands of the digital economy and need urgent reform.

In March 2018, the the European Union proposed a 3% tax on certain gross profits of the world’s largest digital companies, regardless of whether those companies had a physical presence in a country.

Although tech-friendly European countries including Ireland and Sweden blocked the EU tax, France passed its own version in July 2019. Like its EU model, the French tax applies disproportionately to U.S. tech giants by targeting companies with at least US$750 million in revenue that sell online ads, user data or operate a digital marketplace.

And such unilateral digital taxes may even violate EU law, as I’ve argued elsewhere with a colleague.

The U.S.-French digital tax dispute is part of a larger conflict that embroils every country.

Modeled on a framework developed in the 1920s, a large network of bilateral tax treaties forms the backbone of the international tax system. Under these treaties, a country cannot tax a foreign company unless it has an office, store or other physical presence in the country.

Today’s digital companies earn significant profits in countries where they have no physical presence. The result is that nations like France and others around the world, which have large markets for digital services, receive little or no income tax from these tech businesses.

And the problem isn’t limited to web services. Online retailers like Amazon take orders from Paris residents over the internet but avoid having a physical presence by hiring third parties to deliver Parisians their jeans and shower curtains.

Frustrated with the physical presence requirement, at least 36 countries including the U.K. and India have enacted or proposed their own taxes to get around the rule, according to advisory firm KPMG.

Fortunately, there’s an effort underway to fix the problem.

The Organization for Economic Co-operation and Development is leading talks involving 137 countries to modernize the international tax system to allow countries to collect taxes even when companies lack a physical presence within their borders.

The governments have in principle agreed on a framework to design a new system and set a minimum corporate tax rate. The new rules would affect not only tech giants like Amazon and Apple but also many other large companies such as luxury goods maker LVMH and automakers Volkswagen and Tesla.

Agreement has been hard to find, however, in part because avoiding double taxation means that an increase in tax by some countries necessarily will result in a loss of tax by others. Fearing disproportionate impacts on U.S. companies and government revenue, the U.S. has been a particularly reluctant participant.

But things will only get worse for the U.S. if it refuses to budge.

We do not yet know the outcome of the bargaining in Paris, but one thing is clear: The 100-year-old tax system is unlikely to survive intact. If countries cannot agree on a broader reform, they will continue to take matters into their own hands.

Ruth Mason is the Edwin S. Cohen Distinguished Professor of Law and Taxation at the University of Virginia in Charlottesville, VA. Image based on photo by Marco Krenn and Christian Wiedigeron from Unsplash.