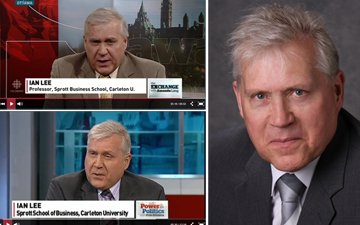 TORONTO, June 1, 2017 – Ian Lee says tax evasion is now a critical issue for governments of all stripes. But he’s also opposed to taxation that stifles innovation and investment.

You’ve been outspoken on the topic of the Panama Papers. How do you think the fallout from that scandal might impact North American — and in particular Canadian — business?

IAN: I think the impact is incremental. Starting in the very late 1990s, when Bill Clinton was still president, the OECD was able to get the attention of key leaders, specifically leaders in the United States, the U.K., Germany and Canada, to start to focus a lot more on this issue of tax avoidance and tax havens.

They started an empirical research program and published some very good studies and created a secretariat on corruption and money laundering. So that train left the station and has been chugging along, not with a huge amount of speed, but it’s been moving forward.

Subsequently, what has happened is there’s an increasing recognition of the problem. It is a form of corruption, it undermines the rule of law, and it does tend to destabilize systems. Average-income people are left wondering why they should pay their taxes when the rich are getting away with it, and that’s a very serious legitimacy problem.

IAN Lee is an associate professor at the Sprott School of Business, at Carleton University, but is well-known to Canadians for his frequent appearances on CBC TV’s On the Money, CBC Radio’s Power and Politics, CFRA’s Rob Snow Show and Sirius Radio. His editorial columns appear frequently in the Globe and Mail, New York Times, National Post and the Ottawa Citizen.

He began his career working in the private sector, at Canada’s oldest bank before heading back to school to earn a Master’s degree and a PhD in public policy. In 1988 he began his teaching career with the Sprott School of business. He frequently teaches EMBA programs in countries around the world, including Poland, Russia, Iran, Mexico, Romania, Cuba, Argentina and China.

Since 2008, he’s appeared by invitation before the House of Commons and Senate committees, to contribute to public policy debates about finance, banking, industry and trade issues.

There’s an increasing recognition that governments have to do something. The big-picture effect of the Panama Papers is to reinforce the commitment of countries such as Canada to the continued targeting of issues such of tax evasion, tax havens and money laundering.

On the public agenda, it’s similar to the transformation in public opinion concerning drinking and driving. If you go back 40 years, drinking and driving just wasn’t an issue. I know because I grew up in that era. Today it’s seen as absolutely socially unacceptable in the court of public opinion. That’s the direction we’re heading as far as public sentiment on tax evasion and tax havens.

Does Canada have a problem with tax avoidance or evasion?
IAN: In Canada there are two main components. There’s the underground component, which is being targeted by the CRA even more aggressively now; they’ve hired more tax collectors to pursue it. These are the people operating in the cash economy who can hide their income — so, carpenters, contractors. I think of that as “tax cheating for the regular folks.”

I think that issue is going to continue to become more important for governments of all political stripes. Liberal, Conservative, NDP. They’re all going to go after it because it’s no longer seen as acceptable.

What will be the biggest opportunities or hurdles for Canadian businesses in the next few years?

There are two or three areas that have been well-noted in the research. First, there’s the issue of investment in information and communication technology [ICT]. Study after study shows we invest in ICT and retraining far less than the Americans. This is a very serious issue. It’s a partial explanation of why our productivity is so much lower than that of the States.

Studies dating back to the 1980s reveal that Canadian companies are 25 per cent less productive than U.S. companies. My own explanation is that because there are still large swaths of the Canadian economy protected from foreign competition, they don’t invest in ICT or training because they don’t have to. They have a protected market and you don’t have to compete as hard. Think of telecom, dairy, banking.

Last year, Stats Canada did a massive study on productivity in Canada. This subject has been studied to death in the last 40 or 50 years, so my first thought was, ‘What can they possibly come up with that’s new?’ Actually, they came up with something very important.

They found [that] the companies that are most productive in Canada are our biggest companies, not our smallest, contrary to all the warm and fuzzy things we say about small business. Small business is actually notoriously less productive per worker. It’s our big businesses — and more importantly it’s our big businesses that export the most — that are most productive.

And guess what? They invest more in ICT and training than other companies because they face aggressive competitors and these investments are the way in which firms try to obtain an edge, a competitive advantage.

How can small business be more competitive?

IAN: Jack Mintz has argued that we have a structural impediment to growth in Canada, and it’s [because of] the fact that we have a more generous small business tax provision than any other Western country. So we create this environment where businesses have an incentive to stay small. But if you stay small, you’ll be less productive, less efficient, less dynamic and less innovative.

IAN: Not enough of our businesses are exporting. Sure, there’s some growth and the trend is in the right direction, but there needs to be more. Increasingly, the opportunities are in Asia, and to some extent in Europe because of the [recent] free trade agreement.

I teach in China every year. I have since 1997. The extraordinary growth and opportunities are visible to anyone working in China.

It is not all sweetness and light. It’s very tough going into China. It’s not a level playing field and there are all kinds of problems but it just means you’ve got to up your game and be even more dynamic and more competitive. The opportunities aren’t just in China, they’re all over Asia, including Korea, Japan, India and so on, and there’s a lot more [that] Canadian businesses can do.

Any other pressing issues for businesses to think about?

IAN: We have to make sure governments do not increase the capital gains tax. With the recent federal budget, there were a lot of people who thought the rate was going to go up from 50 per cent to 75 per cent. It didn’t.

Putting the capital gains tax up to 75 per cent is simply putting an ad on the front door of Canada that says to entrepreneurs with really good ideas and innovations, “don’t come here because we’re going to tax you to death. Go to Silicon Valley where the taxes are much lower and develop your ideas there.”

On the one hand, governments in Canada claim we have to do more for innovation. And yet they then suggest substantial increases in capital gains tax.

There’s a fundamental contradiction in the progressive narrative.  On the one hand, the narrative is the rich are getting richer and the poor are getting poorer and the gap is getting worse and we have to target — and penalize — the wealthy in essence for being successful in business for creating growth and opportunity.

There is the message that we have to be more innovative; we have to encourage more economic growth; we have to get these new digital industries and new high tech companies growing. Yet policies are being adopted that inhibit and sometimes discriminate against these companies.

That’s the fundamental contradiction. One cannot advocate that we target successful businesses, then expect to develop a more entrepreneurial, innovative society.

The Canadian tax system is suffering from a serious trust deficit. So say the numbers in a recent global survey
David J. Rotfleisch