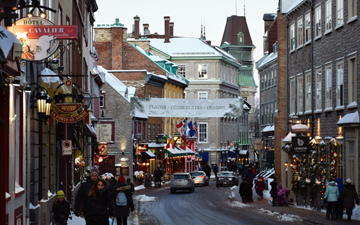 KINGSTON – The federal government’s 2021 budget is significant in at least two respects.

First, it affirms that small businesses are “the vital heart of our economy.” Government support in times of extreme economic stress is therefore critical.

Second, the budget looks to policy innovation at the provincial level as inspiration for nationwide reform — Québec’s universal child-care system being the latest example.

While parliamentarians and provincial legislatures debate unprecedented fiscal measures to support Canada’s small businesses, they should also consider how to embrace another Québec innovation: its simplified incorporation model for small businesses. With some minor refinements, Québec’s system of incorporating businesses can and should be deployed across the country.

The pandemic has reinforced the need to advance reform in an area where we lag behind the United States and many other members of the Organization of American States (OAS).

Small businesses employ two-thirds of Canadian workers and account for about half of Canada’s private sector economy. Yet some neglect to incorporate due to concerns about costs and paperwork, even though constant regeneration of small business is critical to long-term prosperity.

Incorporation helps with this process. When businesses legally become corporate entities or companies, they increase their access to capital because they separate assets in a way that is attractive to those who finance early stage businesses. Business assets are set apart from personal assets that can be subject to claims from other creditors.

Incorporation also encourages entrepreneurs to keep creating new businesses. The limited liability that comes with incorporation caps a founding shareholder’s losses to the amount they invested in the business. This better enables a founder to manage insolvency risks.

Importantly, some of the newest providers of capital to small businesses now rely on algorithms to evaluate credit risk. They’re also increasingly prepared to invest in a corporation without asking for personal guarantees. The ability to contain losses to what was already invested is critical to an entrepreneur’s ability to build other businesses.

But more than that, the pandemic has taught many small businesses that there are advantages to moving from the informal to formal economy. Incorporation can greatly assist in getting access to government support.

Demonstrating that a business satisfies eligibility criteria is easier when it is a distinct legal entity with financial statements. Government delivery of funds is also facilitated when dealing with corporations that already have business numbers and business bank accounts.

Québec was especially focused on helping small business when it adopted a new Business Corporations Act (QBCA) in 2010. To this day, the QBCA’s simplified incorporation structure remains highly innovative, allowing a sole shareholder to dispense with:

More than 25 years as a business lawyer taught me that removing redundant administrative burdens would simplify incorporation for many small businesses. It would also reduce costs that can serve as a barrier to incorporating.

But it is one thing to innovate, and another for innovation to be embraced. To date, only a few hundred companies have opted into Québec’s simplified regime. In contrast, several OAS countries have adopted simplified incorporation systems, many of which have met with extraordinary success. Colombia alone has seen the creation of hundreds of thousands of simplified corporations.

The benefits have been significant and include increased employment and social security contributions and benefits and enhanced tax revenue for governments.

What accounts for the difference in uptake? Québec’s approach could certainly be more user-friendly. For example, it could give a founder the option to dispense with a board and other formalities by ticking a box when incorporating, rather than the current practice of requiring more legal documents to be filed after incorporation.

Efforts need to be publicized

But the OAS and countries like Colombia have also put substantial effort into ensuring that the option is well known and its use actively encouraged. In contrast, Québec has done little to publicize its regime. Unfortunately, a strategy that relies on word of mouth is no strategy.

What is required is a sustained government communications plan that alerts small businesses to the system’s advantages, encouraging them to embrace it from the moment they go online to incorporate.

The QBCA’s adoption marked an important step in recognizing the value inherent in simplified incorporation processes. But more needs to be done for that value to be fully realized.

Other jurisdictions in Canada need to follow Québec’s lead, adjusting and perfecting its model. They then need to deploy communications strategies that will resonate with small businesses — all inexpensive but consequential steps that would help drive economic recovery for small businesses in the post-pandemic era.

But under certain conditions, accountants may represent taxpayers in Tax Court
Partner Posts

What it means for their future, workforce and back-office accounting technology
Thought Leaders