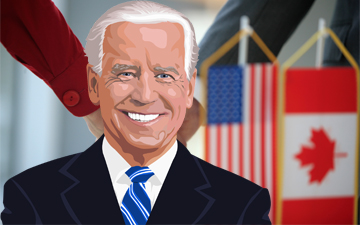 OTTAWA, Dec. 29, 2020 – If the Democrats gain control of the Senate in 2021, U.S. President-elect Joe Biden will face less obstruction on economic and fiscal policies, which in turn will affect the Canadian economy. But because political control could be razor thin, “I see it translating into more incremental policy changes than big policy shifts,” says Fred O’Riordan, the Ottawa-based national leader of tax policy for Big Four accounting firm EY Canada.

The upcoming, run-off elections in the U.S. state of Georgia, on January 5, 2021, will determine control of the U.S. Senate. The Republicans currently holding 50 seats. The Democrats trail with 48. If the Democrats gain both seats, the vice-president casts the deciding vote in the passage of deadlocked legislation. Polling currently shows both Senate races are too close to call.

Stephen Williamson, a professor of economics at the University of Western Ontario in London, says that, if the Democrats end up controlling the Senate they might be more inclined towards stimulus, infrastructure or healthcare spending, whereas a Republican controlled Senate, based on past history, would likely spend less.

James Marple, senior economist and managing director with TD Bank in Toronto, echoes Williamson. If the Democrats end up with political control, Biden’s ambitious proposed clean energy infrastructure spending plan is more likely to be implemented, committing trillions of dollars over the next decade to wind and solar technologies as keys to lowering carbon emissions.

Manufacturing in Canada could potentially benefit from major investments by the Biden Administration in greener sources of energy. Although Biden campaigned with the slogan “made in all of America,” higher U.S. demand might still be beneficial for Canadian exports, says Marple.

On the other hand, a lack of approval for pipelines — for example, Biden vowed to remove the Keystone XL pipeline permit — could hurt Canada’s energy sector. “Without Keystone there’s not going to be a lot of growth in Canadian energy production,” says Marple.

Even without Democratic control of the Senate, Biden will, through executive orders, reverse many of the regulatory changes that President Trump made, especially with respect to the environment and energy, and immigration, predicts Marple.

He notes that Canada had previously increased its immigration quotas — in contrast to the Trump Administration’s clamping down on issuing visas — which has contributed to attracting larger numbers of highly skilled people who might otherwise have gone to the U.S. If the Biden Administration eases those restrictions, that advantage might disappear, Marple says.

Like Marple, Williamson notes that, under a Biden Administration, the energy industry in Canada could potentially be impacted in a negative way if, for example, the Keystone XL pipeline project ends up being cancelled. On the other hand, if Biden’s policies are negative for oil and gas extraction within the U.S., that could benefit Canadian sources for export.

With a Democrat-controlled Senate, there is also the possibility of greener legislation being introduced in the U.S.  Under that scenario, “if people are nimble on their feet and can respond to those initiatives, maybe there is some advantage for some people involved with green technology being produced in Canada and selling it to the U.S.

“But that depends a lot on how innovative people are here,” says Williamson.

U.S. stimulus matters to the world

President-elect Biden “has a more activist economic disposition than President Trump. He’s made it very clear that he is going to try and launch a substantial stimulus program that could include a large infrastructure program,” says Jean-François Perrault, senior vice-president and chief economist for the Bank of Nova Scotia in Toronto. “If he were able to do that, that would mean strong U.S. growth, and by definition substantially stronger Canadian and global growth. That’s unambiguously positive for Canada.”

However, if the U.S. federal government procures exclusively within the U.S, that will limit the positive economic impacts that a large infrastructure program might have on Canada, he notes.

Biden has said that he wants to reduce fracking and drilling in the U.S. on federal lands — in contrast to Trump, who pushed aggressively for those activities. If that becomes policy, the supply growth of U.S. oil and gas would be effectively limited. Should oil and gas demand remain high and Americans aren’t producing enough, Canada stands to benefit, says Perrault.

It is too early to tell which industries in Canada, if any, may benefit or be hurt by changing policies under the incoming Biden Administration, says O’Riordan. But “overall, if an economic recovery starts to take off in the United States, it’s a rising tide that carries all ships. I would expect, other things being equal, most sectors in the Canadian economy would benefit from that, especially those where there is a higher degree of economic integration and there are export opportunities.”

Moreover, Biden’s statements during the campaign clearly illustrated “more alignment around his policy direction, vis-à-vis the federal government in Canada, than there would be under a continuation of the Trump Administration,” says O’Riordan.